The gate of the Eremo di Campello (Design by Carlotta Gentili)

One of the special Places of the Higher Self that we will visit in September is the Eremo di Campello, near the town of Trevi in Umbria, Italy. The final road up to the Hermitage is an unpaved, unmarked climb through olive groves and wooded hillsides. The feeling is desolation mixed with expectation. When we finally arrive in front of a locked wooden gate guarded by a furiously barking dog, the feeling turns to “What am I doing here?” But soon Sister Lucia appears with grand tranquility and a warm smile. She slowly walks down a long path from the Hermitage towards us and swings the gate open. “Welcome in Peace,” she says, inviting us inside.

Founded in 1926 by Sorella Maria (1875-1961), the Hermitage currently is a community of four lay sisters whose lives revolve around periods of silence, prayer, study and work, within the broader cosmic sphere of agape (the Greek word for Love).They are not religious nuns, but rather, by their own definition: Le Allodole di san Francesco, The Larks of Saint Francis. Larks were beloved by St. Francis because “they have a cape like religious habit and are humble birds… When flying, they praise God with great ease.” When St. Francis died a multitude of larks came over the roof of the house where he lay. Flying slowly round and circling the roof, their soft singing seemed to praise God.

“An opening of the heart”

Born as Valeria Pignetti, Sorella Maria joined a Franciscan convent when she was 26 years old. But after 18 years decided with great affliction to leave in order to passionately search the traces of il Poverello, “The Little Poor One”, the affectionate Italian name for St. Francis. Her search brought her to the Hermitage, which at the time was abandoned. The Hermitage is built over caves that were frequented during the 5th and 6th centuries by Syrian Christian hermits. It is very likely that St. Francis visited the remote site and it is certain that St. Benardino of Siena once lived there. 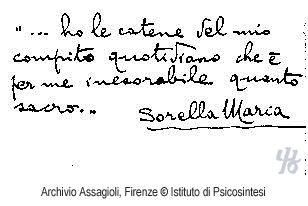 ” … ho le catene del mio compito quotidiano che è per me inesorabile quanto sacro.” Sorella Maria “… I have the chains of my daily duties which are for me as unrelenting as they are sacred.” Sister Maria (from Assagioli’s Archives)

With the financial help of Amy Turton (1857-1942), an Anglican Scottish-Englishwoman who was Sorella Maria’s dear friend and “first companion of prayer,” she and four other sisters began their community life together. Sorella Maria’s belief in all spiritual truths brought the community under attack from the Vatican for decades. In 1931, the archbishop of Spoleto wrote: “They are a community of women very much suspect of protestant heresy and modernism.” But Sister Maria saw the way of the Poverello not as a “cage for one’s identity” but rather as an “opening for the heart and vision for continual interior growth as well as growth in community.”

“Friendship is the greatest force”

As a courageous pioneer of practical ecumenism, Sister Maria exchanged letters with Gandhi for decades and met with him when he visited Rome in 1931. She sent her first letter to him in 1928, in which she wrote:

“I am a wild and free creature in Christ, and I want with Him, with you, with all of you, with every brother and sister searching God, to walk along the path of the truth…”

Her last letter to Gandhi was to congratulate him on his birthday in 1947 – just three months before his assassination. Besides Gandhi, Sister Sorella corresponded with many world figures, including Albert Schweitzer, Evelyn Underhill, Dorothy Day, and even Roberto Assagioli! She wrote: “I consider friendship one of the greatest forces in the world.”

Saying of Sister Maria
“Not disturbing others” is right in the sense of not disturbing them with our personality, with our reactions, etc. But not in the spiritual sense. Spiritually, it is often necessary “to disturb” others. It comes inevitably all by itself. (from Assagioli’s Archives)

During a recent visit to the Hermitage, I was told by Sister Daniela Maria that Assagioli probably also paid a visit to Sorella Maria at the Hermitage. This is very likely given the fact that they were both good friends with Father Brizio Casciolo. This is the priest who married the Assagiolis in 1922 and the man who most likely helped to secure Assagioli’s release from Regina Coeli prison in 1940. Also an early pioneer of ecumenism and interreligious dialogue, Father Casciola was a dear friend and confidant of Sorella Maria since 1916, when she was still a nun with the Franciscan Missionaries of Maria.

“The Light can come from far away”

Ahead of her time and radical even today, Sorella Maria was familiar with the Bhagavad Gita and The Dialogs of Confucius. She said:

“The Light can come from far away… We are not the only ones who possess the Truth. From the sacred books of different peoples can come to us a ray of Light.”

Our visit in September promises to bring us to an oasis of inner and outer peace within the tensions held in all human life. With some luck, we will discover, inwardly and outwardly, in the words of Sorella Maria:

“An invisible church that rises to the stars, not divided by cultural or racial diversity, but rather formed by all sincere seekers of truth.”

2 thoughts on ““A Wild and Free Creature””