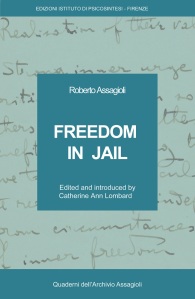 Roberto Assagioli intended that his “prison diary” might become an autobiographical account of the time he spent in Regina Coeli prison under the fascist regime in 1940.  Freedom in Jail offers a vivid picture of Assagioli’s experience through multiple lenses – from the raw concreteness of everyday events to his interior world. Throughout his testimony, Assagioli offers a personal example of how to use difficult life events as an opportunity to develop one’s personal and spiritual psychosynthesis.

Freedom in Jail also provides – for the first time – an intimate look at Assagioli’s own trials and profound insights as he uses his psychosynthesis concepts and techniques towards personal transformation and self-realization.

This book is a priceless testimony for anyone wanting to learn the process through which Roberto Assagioli realized “inner freedom, pure freedom… attained rising above the fetters, a sense of expansion…”

Edited, annotated and introduced by Catherine Ann Lombard, Freedom in Jail is available in English, the original language of Assagioli’s manuscript.

To purchase Freedom in Jail, please contact the Institute of Psychosynthesis Florence at istituto@psicosintesi.it.  Books are also available from the Psychosynthesis Trust London by contacting enquiries@ptrust.org.uk.

5 Facts about Assagioli’s Time in Jail

Freedom in Jail – One Year Later

What Readers are Saying

I wanted to tell you how impressed I am with the splendid work you did with Freedom in Jail. You have turned it into a microcosm, with useful psychological, spiritual and historical material that will benefit many people. Assagioli often would have the inspiration for a book, would write the outline perhaps, then leave it because he was too busy already with something else. But this book represents a milestone in his life and a crucial theme of his teachings. So I am very glad you took care of it in such a precise and complete way. The editorial level is first-rate.

Piero Ferrucci, Psychotherapist and Philosopher, Author of What We May Be

This is an excellent, thought provoking, important book and what a wonderful job Catherine has done. Having read the original file in Casa Assagioli, I appreciate the challenge she took on. It would have been much easier – and more limited – to simply print Assagioli’s handwritten notes. However, she has supported contemporary readers, helping them to connect with the depth of Assagioli’s writings by giving a lovely introduction and skilfully adding notes, images, articles etc. I particularly enjoyed Luisa Lunelli’s description of Assagioli’s “Arrest & Return.” I would never have found that article! It brought Roberto Assagioli alive to me as a human being.

Eina McHugh, Author of To Call Myself Belove

Freedom in Jail is a remarkable view of Assagioli’s microcosm: how he perceives events of reality and the events of his inner world. Like Viktor Frankl (whom he specifically refers to), Assagioli was also given the opportunity to test the effectiveness of his own therapeutic method on himself under fierce and difficult circumstances. We are given a picture of his arrest, the circumstances he undergoes, and his release, but most essentially Assagioli reveals his own inner universe including: his consciousness exercises, the awakened inner energies and the results achieved. Catherine Ann Lombard has expertly assembled his manuscripts and complemented them with a thorough, intuitive introductory study, extensive footnotes and several well-chosen explanatory notes. Because of Freedom in Jail’s extraordinary insight and universal wisdom, this work is largely recommended not only to the discipline’s specialists but also to the lay audience.

Do you want to have a close look into the inner laboratory of Roberto Assagioli’s psychosynthesis? As much as Assagioli appreciated diaries and autobiographies as sources of inspiration for his clients’ personal psychosynthesis, he himself remained hidden behind a curtain through which he radiated his presence of smiling wisdom.

In Freedom in Jail you have Assagioli’s personal diary from his time in fascist prison including his meditations on the true nature of freedom, independence and acceptance of outer circumstances.

After 30 years of developing and creating psychosynthesis in theory and practice, his imprisonment came as a time of personal proof and initiation into the deeper resources of his self. Starting with exact descriptions of all his internal processes in interaction with his new environment, Assagioli moves through even deeper and higher spheres of his consciousness and reaches the peaks of transpersonal experiences.

The further and higher he steps on this path, the shorter are his hints at what he lives through. The silence between his words speak of the ineffable. Very specific quotations from spiritual sources give some foundation and explanation to what happens in and with him.

As clear and distinct Assagioli illustrates his first insights and realisations, the disidentification from his situation and the creation of the inner open space of freedom of choice, as radiant and aphoristic remain the higher dimensions of his later illumination. Through a vivid foreground you see a clouded mountain with the sun at its peak. Can you glance into it?

The indications are very strong for Assagioli’s having experienced true “Sartori“ in the secret chamber of his heart, The prison named “Regina Coeli“ has taken him to his truest soul. Moreover we can witness the inner relationship between science and esoterics in Assagioli’s consciousness. He is neither translating esoterical ideas into scientific terms nor the other way around, but rather  he is “in between“ similar to an experimenter discovering the interactions between thinking and willing, intuition and transcendental experiences.

From this initial point, all his later ideas and books can be developed! At this point Assagioli stops writing and relinquishes the project of publicizing his diary. He steps back not wanting to present himself as some sort of guru. And leaves the responsible task of publishing this key testimonial to his followers.

Catherine Ann Lombard has completed this task in highly professional way, documenting all details of Assagioli’s diaries and papers and supporting the reader with an insightful introduction and extended footnotes and quotations from the author’s sources. Thanks also to the Institute of Psychosynthesis and its archive for facilitating this essential publication!