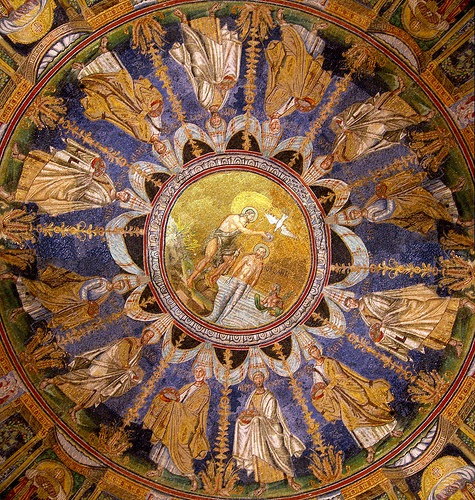 Ravenna is cold in February, but the sun still manages to warm the ancient stone archways. I place my cheek against a rough granite surface and feel the heat and energy collected over time. I have just spent the morning sitting in the Orthodox Baptistery, staring up at mosaics so carefully placed in the ceiling during the 4th and 5th centuries. The apostles march in procession above us, each carrying a triumphal laurel. In the center, John the Baptist is pouring the water from the River Jordan over the head of Jesus, who stands naked in the rippled pool. The Holy Spirit in the form of a dove dives into the blessing held aloft by John. To one side stands the pagan water god with a reed in one hand and a garment in another.

While admiring the intricate images, we are joined by two groups of Italian children. One school excursion after another quietly fills the domed building as a teacher explains the history and imagery that envelopes us. The octagonal room is relatively small and the space intimate. At one point a teacher asks, “Why did they use so many symbols in their art at that time?” Her answer: “Because the symbols conveyed la saggezza, the wisdom of that age.”

Symbols – images, words, and geometrics –invoke the hidden realities behind them. We use symbols to see the invisible veiled behind the visible. From a psychosynthesis standpoint, symbols collect, transform and convey psychological energy. Most importantly, visualizing symbols helps us to integrate the conscious and unconscious elements of our personality, by first setting into motion unconscious forces, which, in turn, produce change in our outer personality.

Where Do We Find our Symbols of Wisdom Today?

As Assagioli wrote more than 40 years ago:

“Symbols are constantly being used by everyone, but generally in an unconscious way and often in unconstructive and even harmful ways.”

Most of us are only unconsciously receiving the symbols that bombard us across our LED screens, telling us that we desire to be sexy, rich and powerful. These symbols are used by branding experts to convince us that we need a cleaner toilet to have more friends. That drinking and eating junk foods will make us happy. That personal power comes from strength – not vulnerability. 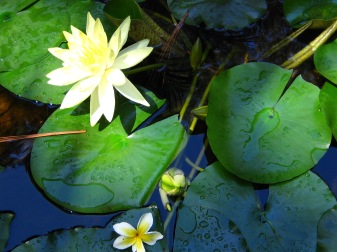 We can, however, choose to evoke the symbols that carry the wisdom of our time in the here and now. Let’s just take the symbol of water, an element which is very present in the mosaic on the Orthodox Baptistery dome. Water is a symbol of nature which includes elements such as the sea, waves, streams, lakes, floods, rain, and rivers. Water is the source of all life and associated with birth and the feminine principle. Water is also associated with purification, allowing for regeneration of life. For example, as rain, water is fertility, bringing life to the planted seeds in the fields.

The symbol of water in the Ravenna mosaic is more specifically a river, represented through the image of the River Jordan and the river god. Rivers flow downhill within certain boundaries from a higher source. In this way, one might imagine the river in the mosaic representing the source of life flowing down from heaven to earth.

Techniques that use symbols include visualizations, inner dialogues, meditations, role models, and, of course, dream work. You can consciously select a symbol that is meaningful to you or encourage one to appear spontaneously. For example, recently I have been working on my need to surrender, and an image that came up for me personally was a young girl standing alone on a boat in a calm river. She has caught a big fish in a net, but is happily letting it go, to swim free.

Words are also symbols with hidden realities behind them. For example, the word anima comes from the Greek anemos which means wind. And the word spirit comes from the Latin spiritus which also means wind. The symbolic use of evocative words has already appeared in a previous blog as an exercise that helps us to consciously experience higher qualities like courage, patience, and hope.

Visualize a Blossoming Rose as your Awakening Soul

Another spiritual exercise that uses an image is Assagioli’s “Exercise of the Blossoming of the Rose.” Flowers, in general, have been regarded as a symbol of the soul. China has the tradition of the “Golden Flower” while India and Tibet have adopted the lotus, which has its roots in the earth, its stem in the water, and its petals in the air. In Persia and Europe the rose has been extensively used. Assagioli encourages us to use this meditation to visualize a rose as it develops and transforms from a closed bud to a fully open bloom, symbolic of our own soul as it grows in spiritual awareness. You can download the Exercise of the Blossoming of the Rose by Roberto Assagioli and try it yourself.

Assagioli states that part of the reason we use symbols is to evoke the hidden realities behind them and their dynamic possibilities in our inner and outer lives. Try working with a symbol this week and see if it brings you closer to Joy.