I spend last Saturday talking to strangers. As a volunteer for the charity Caritas, I spent two hours in front of a local supermarket asking people to donate food to the Italian National Food Bank. This experience meant that I wore a plastic yellow bib (which declared my legitimacy) while dangling plastic yellow bags in front of passing strangers.

Those who were interested in helping, took the bag and filled it with rice, pasta, tomato sauce, olive oil (this is Italy after all!), baby food or canned vegetables. The donated goods were then collected, boxed and sent off to the local food bank.

I startled most of the shoppers that day with my distinct American accent. “Buon giorno!” I called out cheerily. “Would you like to participate in our food collection for the poor?” I asked this at least 100 times that morning and, as you can imagine, the reactions varied. Some simply said ‘No.’ Some said they had already donated at another supermarket. One man said that he could actually use the yellow plastic bag, thank you very much. END_OF_DOCUMENT_TOKEN_TO_BE_REPLACED 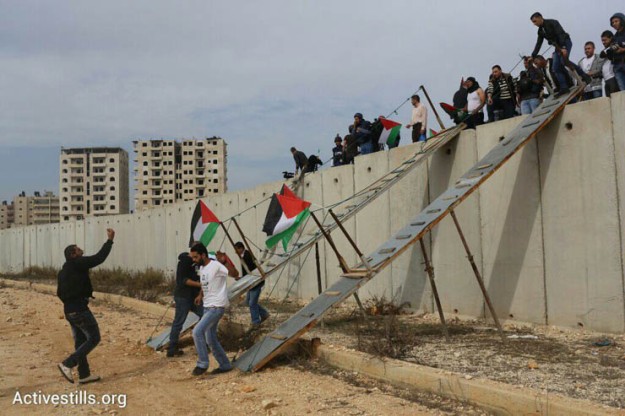 Palestinians and international activists use make-shift bridges to cross the separation wall between Qalandiya and Jerusalem, November 14, 2014. (Photo by Oren Ziv/Activestills.org)

There’s a lot of talk about walls lately. They seem to be going up everywhere.

In Hungry, refugees are cutting through and climbing over the 4-meter high barbed wire fence that extends along the Serbian border for 110 miles. British Prime Minister Cameron has recently received EU approval to control Britain’s own borders. And Israel’s prime minister Netanyahu announced this month his intention to “surround all of Israel with a fence” to protect the country from infiltration by both Palestinians, whom he described as “wild beasts.”

Perhaps the best known wall-builder today is the U.S. political candidate Donald Trump. On numerous occasions, he has boasted about building a wall along the Texas-Mexican border and “getting the Mexicans to pay for it.” Recently, however, he was firmly, but indirectly, admonished by Pope Francis during his visit to Mexico. The Pope said:

“Anyone who thinks about building walls … and not building bridges, is not a Christian.”

What struck me is that Pope Francis seemed to say that a Christian builds bridges AND walls. He did not denounce the walls, but simply added the bridges.

But this simple addition actually requires us to perform an extremely difficult, but necessary act of love and will.