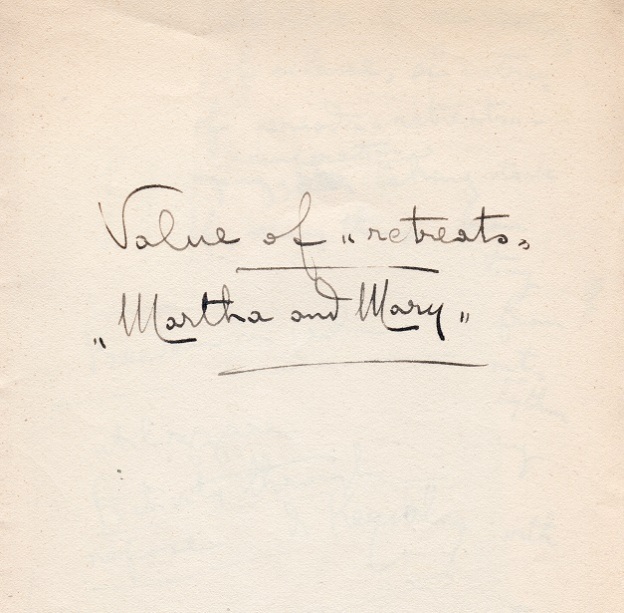 Assagioli’s note from Freedom in Jail

In his book Freedom in Jail (now available for purchase), Assagioli referred twice to the Gospel story of Martha and Mary, and even indicated that he wanted to have an Appendix that would reflect upon it. This appendix was never written, but later his eloquent essay was: “Martha and Mary: The Active Life –The Contemplative Life.” [1]

In this blog and the next, we will take a closer look at his essay. First of all, Assagioli asks that we read this gospel story with an open mind. So let’s begin with the story:

As Jesus and his disciples were on their way, he came to a village where a woman named Martha opened her home to him. She had a sister called Mary, who sat the Lord’s feet listening to what he said. But Martha was distracted by all the preparations that had to be made. She came to him and asked, “Lord, don’t you care that my sister has left me to do the work by myself? Tell her to help me!”

Martha, Martha,” the Lord answered, “you are worried and upset about many things, but only one thing is needed. Mary has chosen what is better, and it will not be taken away from her.” (Luke 10: 38-42)

If you know anything about Middle Eastern hospitality (which requires you to fill the table with the best delicacies in the house), you will easily understand Martha being “distracted by all the preparations that had to be made.” Jesus didn’t just show up, he showed up with his disciples (who probably numbered more than twelve). By the way Martha speaks to him, it is obvious that Jesus is an intimate friend, someone with whom she can frankly share her feelings of frustration. Martha is even comfortable enough to tell Jesus what he should do!

Meanwhile, Jesus has been on the road, preaching to enormous crowds, most of whom are begging to be healed, pulling at his clothes, pressing in on him, with the belief that he is nothing more than a magician. What a relief and comfort it must have been to have Mary quietly sitting at his feet, really listening to his spiritual message. Let’s face it. Jesus was a man, and what man doesn’t like a young woman hanging onto his every word? Even Assagioli in his old age would put on cologne before meeting with a woman client![2]

“Christ in the House of Martha and Mary” by J. Vermeer

While Martha was frantically preparing to offer the guest of honor and his followers a nourishing meal, Mary was quietly receiving a spiritual one. These two figures represent polar opposites  – Martha as external activity and Mary as inner action.

Make no mistake. Jesus certainly loved both sisters. (Later he would raise their brother Lazarus from the dead.) But his answer to Martha, which he calmly offers in three phases, ends with admonishment. First he repeats Martha’s name as if to soothe her. Then he acknowledges exactly how she is feeling and the challenges she faces. And finally, he clearly tells her not to pull Mary into her whirlwind of activity. Jesus says that “Mary has chosen what is better;” he does not say that it is better than what Martha is doing. I believe he is saying that the attitude Mary has chosen is better for her, for him, and for the others at that moment in time.

It’s fine for Martha to do her bustling hostess thing. It is, in fact, an honor to receive such a feast. But it is not okay for Martha to demand that Mary (and Jesus) confirm her way of being by joining in. Jesus tactfully allows Martha to create her lavish meal and place all kinds of expectations on the event. (Something all too familiar to us during the Christmas season.) But he also longs for her to reconcile herself with Mary who has chosen another kind of action.

The Synthesis of Martha and Mary

Assagioli uses this story to show how, for the most part, we exclusively measure action by tangible external results and quantifiable success. However, as he says, “the essential characteristics of true action … are harmony, organic unity, rhythm, and productivity.” One’s motive is the heart of every action. Martha, lost in the busyness of being the perfect hostess, was neglecting the real reason of their being together – to share all their lives in order to personally and spiritually grow!

Assagioli states that the truest activity lies in the heart of silence and apparent inactivity. All great spiritual leaders and mystics – Jesus, St Francis, Buddha, Gandhi, Martin Luther King, Mother Teresa (to name a few) – have preceded their service to humanity with long periods of contemplation and prayer. Assagioli says:

“The hard work that lies behind every productive inspiration, indeed every truly productive and creative act, takes place in a collected mind, in silence, in the inner regions of the soul… [It is] a long, weary path – To achieve the state in which pure contemplation is possible requires a tough methodical work of purification, self-discipline, and ascent.”

In the end, we must strive towards a synthesis of both Martha and Mary within us. Once we find and transcend this polarity of external and inner action, we will arrive to the point where any act, however humble and menial it may be, remains free of our personal attachment and becomes a living, radiating offering of pure Spiritual Love and Will to God and all humankind.

[1] Roberto Assagioli, Transpersonal Development, The Dimension Beyond Psychosynthesis. London: The Aquarian Press, 1993, pp. 234-249. (All subsequent quotes in this blog come from this article.)

2 thoughts on “Collect Your Mind”