News headlines have recently been shouting about the refugee crisis and Germany’s prominent role in welcoming them. Estimates are that more than 1.5 million refugees will enter the country by the end of the year, mostly from Syria, Afghanistan and Iraq. Since I live in a small town in Germany, I thought I might share my personal experience and reflections.

The town where I live is a poor one by German standards and a rich one by world standards. Gronau has a beautiful heated community swimming pool, a Jazz Festival every May, and a well-stocked public library. But the town also has many boarded up factories with smashed windows. Gronau was once a boom town centered around the textile industry. But by the 1970s, all the jobs disappeared, first to Eastern Europe and then to China.

Today one in ten people who live here are on some kind of government assistance. The Netherlands is only four kilometers away, but Gronau is distinctly German with its many bakeries where you can always be tempted by kaffee un kuchen (coffee and cake). In my neighborhood, I have met people from Syria, Turkey, Pakistan, Peru, Egypt, Kurdistan and Albania. I am sure many others living here are not German born.

Our neighbor, however, was born and raised here in Gronau. Six years passed before he invited us to call him and his wife by their first names. Our other neighbor settled in Gronau after escaping persecution in the Balkan states soon after World War II. We still call her Frau Smit.

Two blocks from my home, I came across this graffiti painted on the back of the “Welcome to Gronau” sign (right). In the Netherlands, not five kilometers from here, people strung up another sign (below), and 380 protesters marched to the Enschede City Hall to stop the asylum seekers from moving into their neighborhood. As Assagioli writes:

“What we do not understand, we naturally depreciate and condemn. This occurs among individuals, among nations, among races, and even among those who profess to be religious and spiritual.” 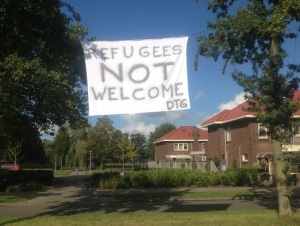 He goes on to say that a lack of understanding actually leads the one who misunderstands to feel antagonistic, bitter and resentful. In the words of Keyserling:

During the past months, about 500 refugees have arrived in Gronau. Last week I answered a call for volunteers and was briefly interviewed to act as a “friendly go between,” accompanying refugees to various social gatherings to help them more easily break the ice and fit in. I spoke with the Project Leader Herr Buss, who has his hands full. He’s been working 16 hours a day with little sleep, processing people who are coming mostly from Syria and Eritrea. He said something striking:

“Most of the people we process we will never see again. They might stay here two months, maybe three, maybe one year, maybe more. But only about one-fourth will be allowed to stay. The rest will have to leave. They all know this, but now, at least they have a place to stay. A place of peace.”

Notes by Assagioli. “Reserve my judgment. There are essential elements, unknown to my personal consciousness, in the situation.” © Archivio Assagioli, Istituto di Psicosintesi

Nobody seems to be saying this in the news – how fleeting this rescue is for the vast majority of the refugees. How few will really be able to settle here permanently. And what might their options be afterwards? It all feels like a swirling whirlpool of humanity, tossed about by political waves of ill will and bad choices. Not unlike their vulnerable dinghies crossing the Mediterranean Sea, these people’s hopes rise and sink with the tides of bureaucratic fear. On occasion do they manage to shock the rest of us into doing something – into activating our Love and Will. But only when we are shamed by the sight of the tiniest of their victims washed up on the shore like discarded flotsam.

We are all in this refugee boat together. They are crossing our borders, but only because we have crossed theirs with our French, British, US and German made bombs, tanks and weaponry. Before Russian bombs started falling last week, 11 other countries had been bombing Syria in this proxy war[1]. When it comes to human dignity – the right to work, eat, sleep safely in one’s home, receive medical care and an education – national boundaries become arbitrary and meaningless. These are human needs that every heart desires.

We all need to shed lovingly understanding on the refugee crisis. As Assagioli writes:

“The effects of loving understanding are immensely beneficial; understanding is directly creative, like a vivid and warm sunbeam it fosters growth and expansion in those human lives to which it is directed and which it penetrates. It evokes the Higher Self, the Soul.”

I am only one person in Gronau, with one beating heart. But from all my heart, I send out an understanding light of welcome.

[1] The following countries have bombed Syria at least once during the past four years: U.S.A., Bahrain, Jordan, Qatar, United Arab Emirates, Australia, U.K., France, Turkey, Canada, Saudi Arabia. Other countries providing planes, etc to the bombing missions include: The Netherlands, Belgium and Denmark.