Recently I ran right into God’s sense of humor. As always, it quietly snuck up on me. Even as I write this, I am shaking my head and smiling at how clever and creative God can be at broadening my inadequate perspective on the world.

It all started with an idea I had for the Sunday School at the local Syrian Orthodox Church where I have been helping out for the last two years. The entire functioning of the Sunday School is chaotic. Five dedicated women have been trying to offer guidance to the children who descend on them every Sunday morning. Sometimes there are only one or two women to supervise, guide and handle more than 30 children of all ages (4-12) who show up at irregular intervals during the two-hour mass.

The Miracles and Struggles of Sunday School

The obstacles to the success of this Sunday School can be disheartening at times. Most of the women, themselves having been children refugees from Southeast Turkey in the early 1980s, do not have much education and, consequently, suffer from feelings of low self-esteem and inadequacy. Culturally, women are still seen as subservient in the church milieu, and hence what they are doing with the children is not valued. They do not receive any financial support from the congregation. I myself have spent money on children’s bibles, colored paper, pencils, and other art supplies. They do not have a proper room to meet in, and often just getting the key to the room is full of confused anxiety.

Despite all this, there are times when I have experienced quiet miracles. One time a young boy, whose name I do not know, ran up to me out of the blue and gave me a strong loving hug. Another time when I was directing the making of Christmas cards, the energy of the 25 children seemed to buzz and stream around me with creative concentration and happiness. Twice they have performed a beautiful Christmas play.

Birth of the Noah Project

And then came the “Noah Project.” I purchased a large sheet of blue paper (1.5m x 3m), unrolled the paper onto my terrace floor, and painted Noah and his ark. My idea was to have the children color, draw or cut out pictures of animals which we could then glue onto the mural. I hoped that eventually the finished mural would be hung up, but I knew that this would be nearly impossible, given the lack of support from the congregation and the low self-esteem of the Sunday School mothers.

Nevertheless, I brought my mural one Sunday morning along with a pile of old National Geographic magazines. The children were enthralled. “Look at his toes!” one small girl remarked, pointing to Noah’s sandaled feet. “This is so beautiful!” I had also printed photocopies of Noah, the building of the ark, and various animals for the children to color. 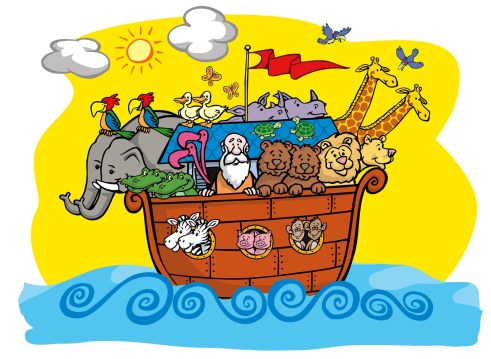 And so we began. First by reading the story of Noah, which, even if you don’t believe in God, is rich with mythological images – the warning of a deluge, building of a huge ark, gathering of male and female animals, forty days and forty nights of rain, the sending forth a raven and then a dove in search of land, the final resting place heralded by a rainbow. Who couldn’t help but fall in love with this story of purification, renewal, and promise? 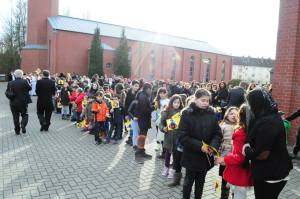 Syrian Orthodox children line up to greet the Patriarch.

At first the children hesitated to cut up the magazines, afraid of getting into trouble. Once I stood there and demonstrated that I really did want them to dissect the glossy journals, tiny scissors started to snip away. The mural slowly filled up with birds, lions, polar bears, and even bats. Little did I think that it might also include the Syrian Orthodox Patriarch.

His imminent arrival to the parish was in ten days time. Why not have the children share their artwork and dedication with the Patriarch, and ask him to sign it? Only with the Patriarch’s signature could the women even dare to suggest that the mural be hung on the wall.

This is when I began to laugh with God. With God’s humorous prompting, the mural had taken on a life of its own, far beyond me and my imagination. Suddenly, my funny cartoon painting was going to be signed by the Syrian Orthodox Patriarch, someone who revered in the eyes of his followers. While coming up with the “Noah Project” and painting the mural on my terrace, the Patriarch was the last person on my mind. I was just thinking about the children and what they might find fun and educational to do.

The plan was set. The night of the Patriarch’s visit, the children would meet him and witness his signing their work of art. The women insisted that I also be there. Once we decided to ask the Patriarch to sign the mural, suddenly the children and the mothers were energized and everyone seriously began to color, cut, and paste.

The Patriarch’s Visit to Noah’s Children

The evening of the Patriarch’s arrival was fraught with the usual chaos that seems to infiltrate anything the local community attempts to do. He arrived in all his splendor along with his down-to-earth charm. The Patriarch is huge man with a beaming smile, with the ability to be fierce when talking about the persecution of Christians in the Middle East today (“Oil is more valuable than our lives and our blood,” he told Dutch reporters.) and fatherly and endearing when addressing the young people from his community. Complete with a white beard and red cassock, you can’t help but make the connection between him and St. Nicolas, who also comes from the Middle East.

After more confusion, jostling with the crowd, and pleading with the door guards to let us in, we were finally all assembled into an office dwarfed by a huge oval table. Spread across the table was the mural of Noah and his ark. 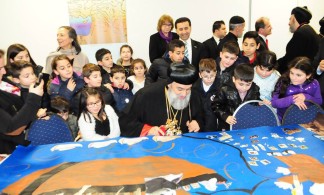 Most of the people crowded in the room with us had nothing to do with either the Sunday School or the mural, but still managed to muscle themselves onto center stage with the Patriarch. The Patriarch ooed and ahhed, said it was shaffiro (beautiful), pointed to some of the drawings and asked questions, blessed the children, and then ceremoniously signed his name with a gold marker. The children beamed as photos were snapped. We were then exited out the door.

“A house,” answered the first team.

The mural was rolled up and never hung on the wall.

I learned one thing. Despite it all, no matter how hopeless we might sometimes feel or how badly we mess up, God is in there somewhere shaking his wise head and laughing.