Often the Christmas story is left unfinished. We usually stop right after the three Wise Men offer their gifts of gold, frankincense and myrrh to the newborn Child. The part we tend to skip over is the Slaughter of the Innocents. This massacre of all boys two years and younger in and around Bethlehem is a horrific part of the story that doesn’t easily fit into the joy of Christmas.

The story goes like this: Following a rising star in the hopes of paying homage to the Child, the Wise Men from the East first stop to pay their respects to King Herod in Jerusalem. They ask if he knows where the infant king is. When King Herod hears about the Child, he is perturbed by the prospect of a competitor king, as are the chief priests and scribes. Herod asks the priests if they have any idea where the Child is to be born. They cite from the prophecies that the birthplace is Bethlehem. Herod then privately summons the Wise Men and sends them onto Bethlehem, telling them to “Go and find out all about the Child, and when you have found him, let me know, so that I too may go and pay him homage.”

After finding the Child and offering their gifts, the Wise Men are warned by an angel in their dreams not to return to King Herod, but to return home by another road. When Herod learns of their surreptitious departure, he is furious and decrees that all male infants must be indiscriminately killed, hoping that the Child will be among them. Meanwhile, an angel appears to Joseph in his sleep, telling him to leave immediately with Mary and Jesus to Egypt. The three become refugees and are spared from the experience of the slaughter.

The Slaughter of the Innocents is crucial to our understanding of the entire Christmas message. Once a vulnerable child full of Light and Love is born, a powerful leader feels threatened and wants him murdered. His evil desire extends not only to the child, but to many innocent children. What might this story reveal to us today?

Just like Herod, we are often unable to hold and accept Light and Love in our own lives. For example, how often have you felt envy when learning a friend or acquaintance has landed a new, more prestigious job than the one you have? Perhaps you have felt mixed and even hostile feelings when confronted by someone else’s beauty, talent, intellect, success, or goodness. These people seem to make us uneasy, anxious, confused, and almost clumsy. In front of them, we feel inferior and seem to loose our self-possessiveness, our self-regard. We might even want to strike out and hurt them in some way, say something that tarnishes the light that shines from them. Dull their glowing success (even just a little).

Repression of the Sublime

In psychological terms, this phenomenon is called “repression of the sublime,” sublime being the expression of something greater than we are. According to Abraham Maslow not only do we all have an impulse to improve ourselves, realize our potential gifts, and become fully human, we also have the impulse to fear these sublime manifestations.

Even when we have glimpsed our own best talents and inner beauty, we tend to want to repress their further appearance. It just feels like too much Light! Too much Joy! In turn, by fearing our own highest potential, we tend to fear it in others and in humanity as a whole. Whether they intend to or not, people who have actualized a higher quality of our human nature stand before us like a mirror, forcing us to see our lesser worth. We then react as if that person were really trying to make us feel inferior. In turn we may become rude, nasty, and even hateful of the other. We might make a joke at the person’s expense in an attempt to demean the beauty before us. Whatever our tactic, our impulse is to dim or destroy the spotlight that is suddenly shining onto our unconscious fear and hatred of the true, good and beautiful in ourselves.

If we can learn to love the higher qualities in others (or at least look at them in a less frightened way) then we might be able to embrace these higher qualities in ourselves, and visa versa. We see by Herod’s example just how destructive the opposite approach and attitude can be. By repressing the sublime in others, not only do we kill the highest potential within ourselves, but we also extend this negative energy to the innocents around us, repressing the sublime in all that might be. 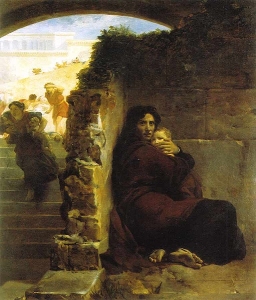 We repress the sublime, mainly because we fear personal and spiritual growth which requires both abandoning what we know and trusting that something better will fill its void. From a psychosynthesis point of view, one possible reason why we suppress and deny our impulses toward the sublime is our shame for not giving expression to this higher impulse. In other words, the more conscious we are of our potential for being fully human, the more guilty we may feel for not doing all that we can to reach it. By repressing the sublime, we rid ourselves of the anxiety that naturally and inescapably comes with the process of spiritual and personal growth. How much easier it is to deny these higher instincts and settle for a mediocre image of ourselves!

Join the Magi – Embrace the Sublime

Psychosynthesis aims to examine, hold and balance both these polar impulses – repression of the sublime and our urge towards it. With awareness and practice, we can learn which polar impulse to express and which to renounce. By refusing to acknowledge the desire of the Herod inside us, we can attempt to become Magi, able to give honor, thanks, and gifts to the sublime before us.

Begin this week by becoming aware of any negative feelings whenever you are confronted by the Love and Light in another person. Try to stand in their Light and use your strong and skillful will to resist the urge to run away, repress or destroy it. Turn inside and affirm that Light and Love in yourself, your gifts, your greatness. Move joyfully toward it.

1 thought on “Join the Magi – Embrace the Sublime”