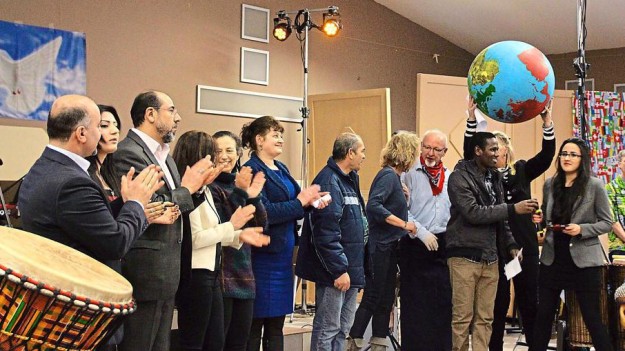 Someone is holding a large plastic globe over my head while I stand in front of about 750 people and welcome them in English to the Friedensfest or Peace Festival. The afternoon has started with various citizens welcoming the crowd in German, Arabic, Turkish, Aramaic, Kurdish, Dutch, Russian, French and Persian. During the past year, 700 refugee families from Syria and Iraq have descended upon our small German town of Gronau, nestled against the eastern Dutch border. More than 90 languages are spoken among a population of 45,000. In stark contrast to the anti-immigration movement of Pegida in Eastern Germany, today we celebrate our differences as well as try to raise money for those left behind in Sengal and Kobane.

Outside in the drizzling rain, men from the Yazidi community are grilling meats while the women fill plates with cut tomatoes and onion salad. I am struck that ‘Yazidi’ is no longer an idea but suddenly a smiling human before me. Inside the hall, Turkish children are circle-dancing to traditional songs. Other children bob their heads to the music while folding paper into origami birds or dipping their hands into paint and printing their palms.

A table laden with Kurdish delicacies.

I pass by the table piled with Russian desserts, and the women insist I try their blini or crepes filled with cheese. Meanwhile, the Bürgermeisterin or mayor is praising the town for living peacefully “without hatred and suspicion, but with joy.” But her speech is lost among the garrulous crowd. As I wind my way around the room, a Dutch woman at a food stand tucked away in one corner tries to convince me to eat raw herring.

Soon, a Kurdish woman is filling my plate with couscous, dolma (stuffed grape leaves), and kubbeh (fried meat dumplings). I dare not venture to where the German women are selling their cakes covered in whipped cream.

While sitting, munching on baklava, and chatting with my neighbor, I wonder how our being together is no small miracle. The hall where we all are gathered belongs to the Syrian Orthodox Church, whose members were refugees thirty years ago escaping Turkish and Kurdish oppression. This year marks the 100th anniversary of their genocide under Ottoman rule. Within recent history, most of our nations have fought one another. Germans fought Russians, Brits and Americans in World War II and occupied the country of their Dutch neighbors. Iraqis and Iranians battled each other for more than seven years.

Yet, now we all sit together, welcome each other in our native tongues, eat each other’s food, and enjoy our children’s traditional dancing. Perhaps integration only starts (as well as stops) with the sharing of stuffed meat pies, strong tea, and over-amplified folk music. But still, the ice is broken, elbows rubbed, and the nationalistic and ethnic labels transformed into neighborly faces.