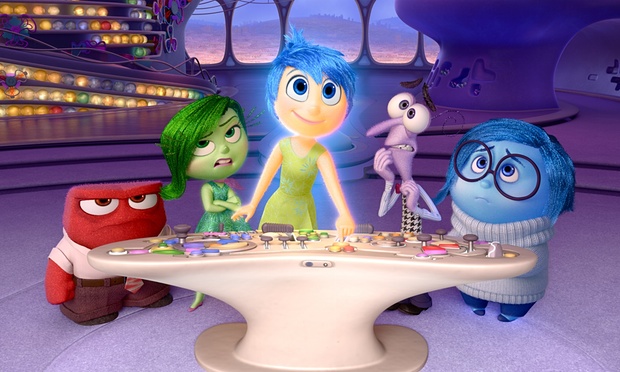 At the controls in Riley’s  brain Headquarters. From right to left: Anger, Disgust, Joy, Fear, Sadness. Photo by Pixar.

Yesterday I went to see the new Pixar movie Inside Out. It is an intelligent 3D-animated feature about 11-year-old Riley who moves with her family from Minnesota to San Francisco. But the real stars of the film are her five emotions, Joy, Sadness, Anger, Disgust and Fear, who are busy operating Riley’s outer behavior from her brain Headquarters. I will not go into details about the story, but I did find it entertaining, fun, and thought provoking. The movie has received rave reviews and is topping all kinds of records for ticket sales.

Today in the Guardian newspaper, one movie critic has warned shrinks to stay away from the movie. (Oops! Too late!) Psychology professionals (along with some parenting forums) are reportedly outraged that Sadness is shown as fat, frumpy and unattractive, and Joy is slim, pretty and smart. What is the film saying? That fat people are sad and thin people are full of Joy?

Actually, from a psychosynthesis perspective, this discrepancy could have easily been explained (and the movie would have been much richer) if the five emotions had actually been five different subpersonalities. Like our subpersonalities, in the movie each emotion not only has feelings but also a body and mind as well. All are embodied in a type of human form. Sadness is the color blue and, okay, let’s say full-bodied, while Joy is a slender and an adorable version of Tinkerbell. In addition, all five emotions have cognitive functioning, that is, they all contemplate, calculate, make decisions, and integrate new ideas and experiences, especially when they have to find a way to reconnect to Riley.

Miss Perfect from Around the World

Joy and Sadness as Polar Subpersonalities

In fact, from my perspective Joy was not Joy at all, but a familiar subpersonality that I have consistently seen in most of my female clients of all nationalities – Miss Perfect. Riley’s Joy had to keep everything under control in Headquarters, she was pretty and perky and smart. Joy did not allow the other emotions much space and was especially in conflict with Sadness, who, in psychosynthesis terms, was her polar subpersonality. Sadness is also recognizable as a role that most women secretly carry around with them. She is less than perfect, the one who feels inferior to everyone else and doesn’t belong –fat, stupid, tall, short, the wrong color, old, unsuccessful, a bad mother, whatever, you name it.

In large part, the movie’s tension revolves around the conflict between Sadness and Joy. They slowly come into relationship and, at the end of the movie, are able to integrate and allow Riley to experience her reality in a more holistic way, and, as a result, come to realize a deeper, richer feeling of Joy.

The Missing Roles – The I-Self Connection

Perhaps, from a psychosynthesis perspective, two essential roles are missing in this movie: the “I,” or center of personal conscious and will, and the Self, or center of transpersonal consciousness and will. Only Joy, Sadness, Disgust, Anger and Fear have control in Headquarters, but Riley’s “I” should have really been the director of them all and in charge of her daily choices. At the same time, there was no Higher Self available for Riley to relate to, no superconscious material to help her recognize a higher purpose and meaning in her move to San Francisco.

Riley’s Joy is generated by goofiness, ice hockey, friendship, honesty, and family which are portrayed as islands powered by Headquarters. As each of these values are threatened by Riley’s repressed grief for her home in Minnesota, they begin to crumble and collapse into her Memory Dump, an abyss between Headquarters and the rest of Riley’s mind where faded memories are disposed of and forgotten.

If Riley had been aware of and encouraged to open up and reconnect to her Higher Self, she could have powered her “value” islands, not only with her own energies, which were clearly becoming depleted by her longing for home and the incessant conflict between Sadness and Joy. Instead she might have been able to draw on the infinite source of Love and Will we all have available to us. Her Higher Self would have readily enabled Riley to embrace the trauma of being 11 years old in a strange, unfamiliar, and at times disheartening world and ultimately grow – personally and spiritually.

Don’t get me wrong. I liked the movie and would enjoy seeing it again. But it also made me a little sad that the Higher Self didn’t even get a bit part despite it being such a Shining Star.