Note that this blog is an excerpt from my published article: A Snapshot of the Philosophical Library: Florence, Italy, 1922)

While conducting research, I often become like Alice and Wonderland, chasing rabbits down the garden path. Most recently, I came across a fascinating book, written by George David Herron (1862-1925), an American clergyman, lecturer, and writer from Indiana. In his book The Revival of Italy, published in 1922, Herron has a beautiful passage describing Roberto Assagioli as the inspiration for the Biblioteca Filosofica. (Philosophical Library) in Florence.

A lively center of philosophical discussion, the Philosophical Library was started around 1903-1905 by those studying theosophy. Wanting to deepen their understanding of Oriental philosophy, library members loaned books, organized classes, conferences and published a bulletin.

Assagioli was one of its more frequent visitors.[1] The Philosophical Library’s intent was to create a “free university for philosophical and religious studies” where the public could come and learn more about the current cultural movements such as Pragmatism, Idealism, and Modernism in a non-academic setting.

Why Italian Youths Longed for a New Spirituality

In his account, Herron notes that Assagioli is “possessed of unusual discernment of mind as well as purity and power of spirit.”[2] He quotes Assagioli’s reflections on the reason why Italian youth at the time were searching for spirituality, which could still be valid today, nearly 100 years later:

“It is due to great dissatisfaction with old forms and old methods in every field: religion, philosophy, education, social and political activities. There is in them a deep yearning, a passionate impatience, for something new and better.

They are eagerly searching, looking into the past and toward the future, to the East and to the West, for somewhat to satisfy their spiritual hunger. There is still confusion and groping, but the young men and women are finding their way, and finding it through a quest that is at once spiritual and practical, mystical and constructive.”

Herron went on to ask Assagioli about his own personal purpose, to which Assagioli responded:

“[I am] seeking the formation of a true ‘science of the soul’ — in which science may be included a vital synthesis of all recent discoveries and developments of scientific psychology with the intuitions and inner experiences and methods of oriental spiritual experience and Christian mystical consciousness.”

Psychosynthesis Women at the Philosophical Library

What also delighted me, after reading Herron’s brief description and interview with Assagioli, was to find Herron’s acknowledgment of Assagioli’s wife, Nella Ciapetti (1893-1973). What a nice surprise to see Roberto and Nella referenced side-by-side – by an American no less!

According to Herron, she is vibrantly alive, “a young woman of great spiritual and intellectual power.” He describes Ciapetti as the founder and inspiration of the Lamp-Bearers,[3] a women’s movement that stated in its prospectus: “There exists, under all the diversities of races, creeds or tendencies of thought, the same fundamental and sacred humanity.”[4]

Contessa Gabriella Spalletti Rasponi, the first President of the Psychosynthesis Institute in Rome.

Herron also notes the presence of  Gabriela Spalletti Rasponi, who later became the first women president of the Psychosynthesis Institute in Rome. Herron said that she was:

…indeed a superior woman, who combines genuine religious fervour with clear intellectual insight and practical efficiency and adaptability … working vigorously for all the rights of women as citizens and for their education and preparation for public activity and position.

Nearly 100 years later, we can wonder at this vibrant, active community of philosophers, writers, and spiritual thinkers – men and women – who gathered at the Biblioteca Filosofica in Florence. Herron had turned to Italy towards the end of his life as a final Utopian hope.

The early 1920s were born out of “The War to End All Wars”, which garnered the hope needed to catapult a period of social, cultural and spiritual transformation. Windows were metaphorically thrown wide open and anything seemed possible. As a new European republic, Italy was especially poised to assume its role and Florence, the city of Dante and the Renaissance, even more so.

Today we can only imagine the sound of the philosophers’ mingled voices, envision their nodding of heads, feel their excitement upon learning of oriental spirituality. We can only imagine … and yet we can also prosper from what we have inherited from them – the opportunity to synthesize high intellectual understanding with worldwide spiritual perceptions. 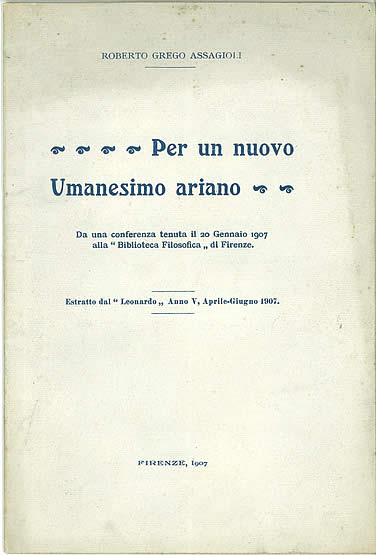 Assagioli’s article “Per un nuovo umanismo ariano” (“For a new Arian humanism”) published by the Biblioteca Filosofica of Florence in 1907. Note that his use of the word “Arian” means Indo-European, or coming from India.

[3] During the early 1920s, Ciapetti become the coordinator of the woman’s movement Portatrici di lampade (Lamp-Bearers) and belonged to a special committee of women who collected memberships for the Rivista Spirituale Femminile (Women’s Spiritual Magazine; Esposito, p. 38).

2 thoughts on “Snapshot of the Philosophical Library”