August is here again, and this weekend I will be busy making gnocchi for our village sacra (food festival). A part of our summer break, I offer you a story I wrote about this experience.

This is long story for a blog and comes in two parts. I hope you enjoy it and your summer!

From the day I arrived in the village, the following words seemed to follow me around:

“Do you know about the sagra dello gnocco (the gnocco festival)? The first weekend in August? Gnocchi d’oca! (Small potato dumplings in goose tomato sauce.) They  are famous all over the area! And the women always need help in the kitchen…”

I would stand in front of my new neighbor smiling and nodding, beset with the knowledge that she (it was always a she) was waiting for me to volunteer. Since 1986, the village has hosted the Gnocchi D’Oca festival the first weekend in August on Friday, Saturday and Sunday evenings, complete with music and dancefloor in the open air. Whenever we mention the town to anyone from the surrounding area, they always start raving about the delicious gnocchi.

Each night of the festival, approximately 1000 people ascend upon the hilltop village for dinner. Just imagine how many gnocchi that means! And these village women would not be caught dead opening plastic bags of prepackaged dumplings or jars of factory-made sauce. No. Never. Each and every gnocchi must be made fresh everyday … by hand! The hands of the village women. And they were quick to let me know that this also meant me. 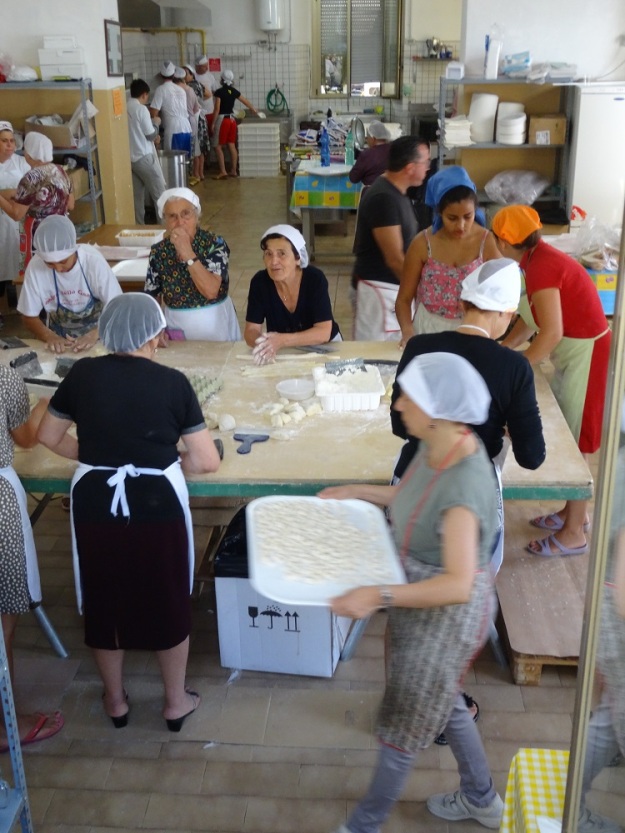 Gnocchi Making Table with kitchen in the background.

At first I shuddered. Do not dare underestimate these village women! Most of them were born soon after World War II, before electricity came to the village, when washing clothes meant carrying them on your head to the nearest fountain or stream. I am, after all, a spoiled American-born baby-boomer – raised on Velveta cheese and too much television. These women work. Their daily lives, fueled by very strong expresso, can include tending their large garden, making jam from hand-picked blackberries, killing a dozen chickens, rolling tagliatelle – enough for ten people at pranzo, taking care of grandkids, cleaning the family crypt at the cemetery, arriving promptly at 5pm to the church to say the rosary together, and running down to the pharmacy to pick up nonna’s medicine. How could I ever keep up with them making gnocchi?

Despite my worries, I was soon baptized with flour, warm potato dough and the click-click-click of the pastry cutter. At first I thought I might be relegated to peeling hot potatoes – all six tons. But instead on Friday morning, I was given a hair net (I had arrived with my own apron) and was ushered to a huge table around which more than a dozen women stood rolling long ropes of dough and chatting away. Well, I say ‘chatting’ but it was really more like animated shouting and peels of laughter at the high volume on which Italians seem to thrive. 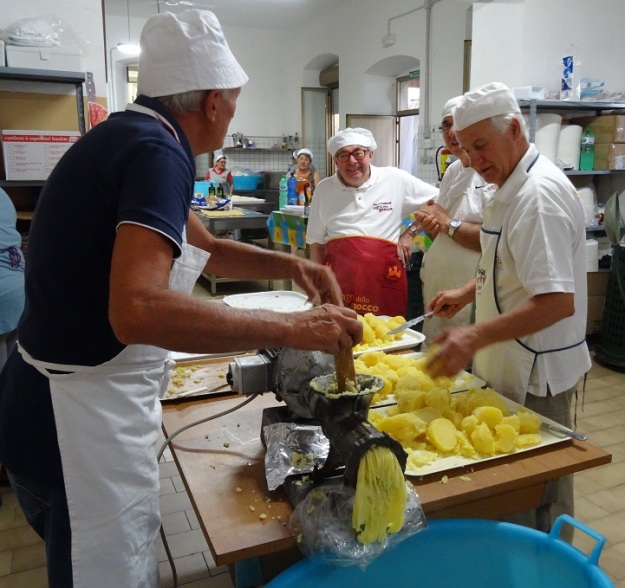 Our village priest Don Stefano (wearing glassses in the center) takes a break from peeling potatoes.

Not long after I arrived that morning, Don Stefano, the village priest for the past 32 years, descended in full liturgical garb upon the gathering of about 30 people, all at their assigned kitchen posts. Standing quietly, we all said an “Our Father,” and then Don Stefano bestowed his general blessing on our gnocci undertakings. The sign of the cross finished off our prayer and shouts once more flew around the kitchen. One of the men came over to me to ask jokingly if I had brought ear plugs.

Meanwhile, Don Stefano slipped out of his green vestments into a hairnet and apron and was at the potato peeling table, which was manned mostly by men. “Why Don Stefano is peeling potatoes!” I said quite surprised. “Oh yes,” one of the women smiled tenderly as you might towards an inquistive child. “Everyone does their part for the sagra.”

Everyone’s part was clearly pre-determined, and I quickly sensed a strong kitchen hierarchy. I had been warned beforehand not to even offer my meager services to the women in charge of the sugo (tomato sauce). These echelon cooks take their posts and secret ingrediants very seriously. When I did dare to venture into the kitchen where the sauce was simmering in order to snap a few photos, I met the most experienced of the workers. Clara, the oldest member of the kitchen staff (age 87), was sitting in one of the few chairs available deboning roasted fowl. “What’s that?”I asked. “They’re geese.” She said. And then quickly fired back with a smile, “Well, they were geese.”

Back in the gnocchi assembly line, people were boiling, peeling, and straining steaming potatoes into large blue plastic tubs. To transform this potato paste into gnocchi dough, two pairs of elite women with strong backs and arms stood on raised platforms at each end of our large table. The blue tub full of potato mash would arrive and spill out in front of them.

They would then add flour, salt and 3-4 eggs to the potato paste. Nothing was measured. Everything they added was entirely by feel and sight. These two women would then knead the paste together into a huge ball of dough, which they would eventually divide in two, each of them continuing to knead. The secret was to knead just enough for the dough to come together and still have a light, airy texture and not to add too much flour which gives you hard gnocchi. Finally, the dough would be divided into large logs, sliced into 4-inch long pieces and cut into smaller balls for the gnocchi makers to start rolling, rolling, rolling…

As one of these gnocchi makers, I rolled these smaller balls of dough into ropes about an inch in diameter and then started slicing them – click click click – into one-inch pieces. The dough of each newly made batch always felt slightly different. Sometimes the women would comment, “This batch is softer.” or “This one is harder.” And the rest of us would nod in agreement. Sometimes the batch of dough was still warm to the touch, and other times when I handled the dough, the sweet aroma of cooked potato floated over me.

How to the Italian women always seem to do it? Beatrice looks stylish while collecting gnocchi!

We were always dusting our cut gnocchi with a little flour – too much flour and the gnocchi sticks to the bottom of the pan while cooking, too little and they stick to each other. Then young girls, not yet old enough to roll the dough, would arrive with trays upon which we would scoop up our gnocchi and have them carried away to the kitchen. As we added the cut pieces, the girls would shake these trays to evenly distribute the gnocchi. At one point, I started shaking my hips in rhythm with the tray when adding my gnocchi. At first the poor pre-teen girl who had to deal with my antics smiled shyly, then became embarrassed, and finally somewhat despondent with my ridiculous behavior.

From the tray, the gnocchi were carried to a large vat of boiling, salted water, cooked for 2 minutes, given an ice bath, tossed lightly in olive oil, returned to a fresh tray, and finally placed inside a gigantic refrigerator to await the final preparations that evening. Later they would be cooked once again for 1-2 minutes and doused with the famous goose tomato sauce.

Having baked my own bread for more than ten years, I was used to handling dough and settled easily into this job. Still the women were impressed, and another foreigner who had lived in the village for the past 12 years was surprised to find me working there. “I’ve been coming to help for years, and they never put me at the rolling table,” she said amazed. “Have you ever made gnocchi before?”

I had to admit I did only once, years ago when we were first living in Italy. At the time, what amazed me was just how much flour and how little potato the small dumplings actually are, how much work they take to make, and how that work is not worth feeding just two people. By my calculation, the time it takes to open a plastic bag of pre-packaged gnocchi and boil them was equivalent to the time they seemed to disappear from the plate in front of my husband. I told him afterwards that I would never make gnocchi again.

But as they say here:

“Per compagnia anche prese moglie un frate. In company, even a priest takes a wife.”

Meaning that being together can cause you to do something you would never try alone. It’s the being together that matters most, and I noticed the first week I lived in Pieve that the people simply like spending time together – eating and talking (like most Italians), but also just being together.

Joy seems to be equated with numbers. The more people sitting around the table eating, the greater the allegria. People often tell me what a nice time they had by simply reporting on how many people were around the table: “We were ten altogether!” or “When we sat down, we were 22.” That entire weekend I experienced a great communal joy of simply being, working, and sharing together the creation of a successful festival.

For three consecutive mornings, I would spend four hours rolling rope after rope of dough and cutting them into bite-size gnocchi. Believe me, that is something I would never do alone. But only in compagnia.

This story and all its photos are copyright of Catherine Ann Lombard, 2018.