In Umbria, it all happened gradually. Like contracting the virus itself, I suppose. One person wearing a mask at the supermarket and everyone trying to act normal about it. The fervent washing of hands upon entering home. The silly jokes. Do you know the latest Italian slogan? Meno tasse, meno tosse (‘Less taxes, less coughing.’ But in Italian it’s funnier because it rhymes.) The collective denial when everyone shook hands as they offered the Sign of Peace during Sunday Mass.

Then things started to heat up. Like the feverish heat of the virus, I suppose. We were only allowed to go out to work, for food shopping and emergencies. Signs warned us at the supermarket to stand at least a meter apart while waiting on line. But I wondered about buying fruit and vegetables that anyone could handle and easily sneeze on. All the flour was missing from the shelves and the mozzarella nearly gone. Schools were all closed, but bars were open and restaurants too. People were still making plans to meet for dinner.

Suddenly everything nearly stopped. Like haltering breaths strangled by the virus, I suppose. We were all forbidden to leave our homes. The cry “Restate a casa. (Stay at home!)” came from every conceivable social media application. For three days, the mayor was furiously screaming at us from tiny videos on our phone, “I don’t know how to say this any plainer.” He looked tired and sounded exasperated. “This is not a holiday. This is a war. RES-TA-TE–A–CA-SA!” Every sharp syllable of his warning crescendoed into a staccato scolding.

And then lockdown. Like weary limbs trembling under the virus, I suppose. We live on a tiny hilltop outside of a tiny village nestled under the Italian Apennines (‘tiny Alps’). The life we have chosen to live these past three years means that we are almost always working at home, in the garden, walking in the countryside. Physically, nothing much changes for me, but I mentally struggle with being limited to the space I now call home.

And still… Spring is vibrating forth. Like the life force that surges against the virus, I suppose. Nature refuses to lock down. The blossoming plum tree in front of my house hums with bees that together sound like a distant freight train. Everyday new wild flowers appear. Yellow primroses blanket a meadow, violets lift a corner of a field to delicate heights, and the plum blossoms throw their perfume my way as I hang up the wash. New lambs are being born and wandering the countryside with their mothers. Nature is surging forth with life. Nothing is locking her up. No one can lock her down.

Amongst the fervor of spring, there is silence. Like the deep sleep of those fighting the virus, I suppose. Greta has gotten her way. Nobody is traveling by plane these days. The roads are so quiet that we can hear the Rasina gurgling half-a-mile away. A river where Saint Francis is said to have washed his wounds after trying to preach to the locals who only jeered and threw stones at him. A river where decades ago the local children used to swim and catch river shrimp to eat.

With life comes death. Whether we wash our hands or don’t wash our hands, we will, everyone of us, die one day. It’s been scientifically proven! I remember one summer afternoon while visiting Giuseppa in her garden, I heard the mew of a newborn kitten coming from under the pigeon coop. Its mother had abandoned it to die; it was blind and starving. I scooped it up and held it against me as it feebly sought mother’s milk. Distraught, I turned to Giuseppa and said, “Oh, Giuseppa, what should I do? What should I do with this kitten?”

Giuseppa, a wise old farming woman, once told me how as a young girl during and after the Second World War, her job was to take care of the beasts. “We had large bulls to pull the plow, goats, rabbits, pigs, and of course chickens,” she said. “My two brothers were afraid of the bulls, but I used to love to walk with them, pulling them by their nose rings. They were really gentle creatures. You know, with animals, you can always tell how they’re going to behave. It’s with people that you can never be certain.”

But this time, Giuseppa looked at me as if I were a small child who had dropped all the fresh eggs. “What should you do, Caterì?” she asked. “Why, put it down.”

It was a direct and poignant reply. I instantly recognized the need to allow Nature to take its own course, to trust that the mother cat’s instincts were better than mine, to recognize that with sacrifice comes strength and renewal. I put the cat down.

We are all being forced to enter into a time of purification and sacrifice. Oddly enough, we are now halfway through the period of Lent– a time before Easter when Christians seek purification through fasting, prayer, and charitable acts. The forty days of Lent are, in many ways, similar to the Islamic time of Ramadan. During Ramadan, Moslems are expected to fast as well as give alms and read the Qur’an.

Assagioli wrote extensively on what he called “the science of applied purification”, insisting that this work must be undertaken in order to transform the lower characteristics of our personality and bring unity to our soul. He described purification of the personality as a process of re-orientation and elevation of the higher mind. But we can also do this work as a nation. As Assagioli wrote:

“A nation is an entity, a soul analogous to a human soul: it can be noble and high or selfish, proud, overbearing. It is about educating, raising, purifying the soul of one’s nation, of which each of us is a part.”

Nature is our solace and our guide. She is here to remind us that death is transcendent and life is eternally renewed. 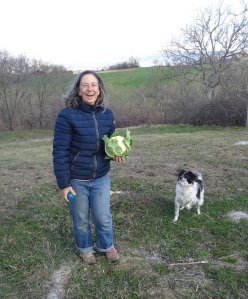 The author with a cauliflower from her garden and her dog Pina. All under lockdown.

10 thoughts on “A Week under Lockdown”