While living in Ireland in 1998, Catherine was surprised to find herself one summer working as a waitress in a little café in the popular destination town of Kinvara. Nestled in a crook of Galway Bay in the West of Ireland, Kinvara is a place of megalithic tombs, holy wells, a 14th century castle, ancient cairns, Irish music, and weekly set-dancing. Out of her experience, Catherine wrote the book “God is in Rosaleen’s Restaurant.” This blog comes from her book. 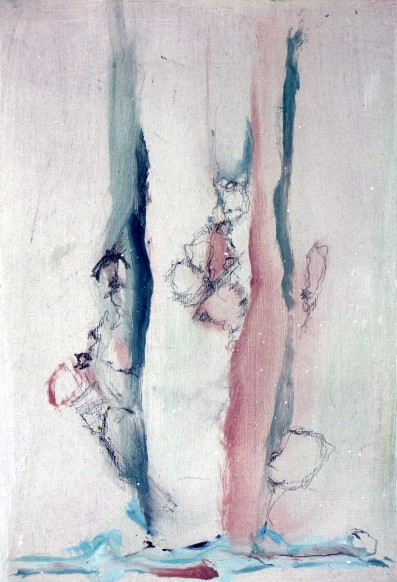 I found it curious who ate what and how much. The Burren lamb bones gnawed clean of meat. The barbecued chicken wings, once garnished on a bed of lettuce, reduced to tiny sticks. Baked cod picked apart and left under a napkin tent.

Was it the food, its taste and appearance, that mattered or the hunger, its degree and duration? Was it the conversation shared or the person listening? When we are given the food of life, what and how much do we eat?

By 8:00 one evening we were out of soup, mussels, and salmon. I remembered Christ in Cana changing water into wine, Christ on the grassy shore blessing the five loaves and two fish to feed the multitudes, Christ filling Simon Peter’s net with fish. I remembered St. Brigit churning so much butter that the Druid set her slaved mother free, Brigit brewing 18 vatfuls of ale from one sack of malt, Brigit changing water into milk to cure an ailing maiden.

Often it happens when we’ve run out of something — courage, strength, love, hope — more appears. Or perhaps we select another item on the menu, which is often just as good and maybe even better. Or perhaps we are satisfied with less.

“Do you mind if we smoke?” He was an older man with a diamond sparkling from one earlobe. She was younger than him and smelled of drink. With them was a man-child, perhaps fifteen-years-old, tall with baby flesh, head buried in his wide hands.

“No,” I lied. Customers could smoke, but we didn’t encourage them. Ashtrays were stacked behind the extra napkins underneath the register counter.

“Oh, you’re very kind.” The man’s smile sparkled with his diamond. The woman fluttered with her cigarette pack and lighter. The boy sunk his head deeper into his hands.

My kindness had nothing to do with the gratification of this man’s indulged pleasure. In fact, at that moment, I felt rather mean, wishing he would leave and take his bad habit with him.

I then stooped down and leveled my face with the boy’s. “Would you like something to drink?” I asked the sullen eyes.

He lit up brighter than their cigarettes. Slowly, he looked from woman to man to me. “A Coke, please,” he said, smiling at last.

It was my first night at Rosaleen’s, when the restaurant filled and I ran into the kitchen to shout out Table 3’s order of two soups and two chicken breasts. I needed ice for a jug of water and my mind was racing with all the other drinks I had yet to deliver.

“Relax, Catherine, relax.” Rosaleen’s voice penetrated my panic like a cold blast of air. I stood still. Instantly, I knew that if I could relax, my energy would flow full.

After the last customers left for the night, stillness entered the restaurant as if to order a meal itself. Suddenly, my legs no longer had to take me anywhere but home — and at my own pace. The restaurant became mine. I stacked chairs on tables and wiped down counters, cleaned the coffee machine, and wrapped up deserts. Customers’ faces floated before me and disappeared. While filling the sugar jars, I smiled over something said, frowned at the rudeness of another.

It was a holy time for resettling into myself. A time for reflection, purification, and surrender to the night. 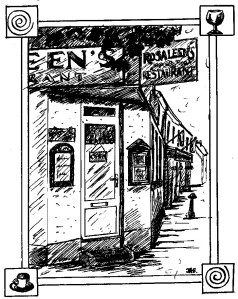 3 thoughts on “Under the Napkin Tent”