(A while gathering dillisk from the rock, a while fishing, a while giving food to the poor, a while in my cell.)   – Irish monk (12th century?)

Summer is here again, and so I thought I would dig out a story from fifteen years ago, something I wrote while my husband and I spent six weeks on the island of Inishere, Ireland, helping Anita and Paraic with their new B&B and café not to mention their farm and four kids. I will always be grateful to them for their hospitality during the summer of 2001.

This is long story for a blog and comes in two parts. I hope you enjoy it and your summer!

An hour by ferryboat from the city of Galway, Inishere (also known as Inis Oírr) means Eastern Island as it is the closest Aran Island to the mainland and the furthest east. This tiny island (2-1/2 by 1-1/2 miles) has been inhabited for 3500 years and Gaelic is the spoken language of the islanders. It has a population of about 300 people, and nearly everyone is related to someone else. Approximately 30,000 visitors descend on the island every year.

Anita, Paraic, and their children were there to meet us in their tractor when we disembarked from the boat. We greeted each other with hugs and kisses, loaded our bags onto the back of their tractor and climbed aboard. Tightly crunched inside the small cab and cushioned by children on our laps, we sighed with relief as the noisy engine pulled us up the hill to their spacious home.

Pariac and the kids pick us up at the ferry.

There are five villages on Inishere, all clustered close together on the north side. We headed to Castle Village named after the 14th century castle that O’Brien built inside a 4th century fort called Dun Formna. Today the castle is a ruin on the highest hill which has expansive views of the other two Aran Islands, nearby Inish Maan and the further west and largest called Inishmore.

Paraic was born on the island of Inishere. His face is framed with bushy eyebrows, sideburns and windblown hair that must have once been flaming red but now is the same ruddy color of his weathered skin. Big enough to fill a door frame, he moves slowly and carefully. His eyes are blue and wide and don’t often meet yours. His first trip to the mainland was when he was 16 years old to attend the Galway County Fair. As a young man, he spent two years in London, but returned knowing he was part of the island and could never leave.

Pariac is of few words and he carries the wisdom of having to survive on what he can grow. One day Anita asked me to pull out the rucola plants in the garden, which were going to seed. “Oh,” Paraic said to me when I arrived in the garden. “We have nothing left to plant there and I hate to leave a patch of garden bare.” Later when he saw the earth clinging to the plants I had uprooted, he gently admonished me, showing me how to shake them more thoroughly, preserving all the precious soil. One time a visitor brought baby carrots and he was quite upset, thinking we had pulled them from the garden. “I would never pull a carrot so small,” he said. “We should give everything the time it needs to grow.”

Anita is American, fourteen years younger than Pariac, wide-hipped and freckled with sandy blonde hair. They have been married for nine years and while living on the island Anita has learned how to bake brown bread, make ice cream, pull rhubarb from the garden and bake a tart, turn wild black- and gooseberries into jam, and manage the intricate subculture that exists in a small island community. Her energy seemed limitless. During our stay she breast-fed her baby girl, swam in the sea nearly every day, managed a lunch café and B&B, and mothered three children ages 8, 6, and 5.

Mícheál, Réamonn, and Bebhinn, who most mornings sounded like a herd of elephants running down the hallway, kept both my husband Kees and I busy, entertained and slightly mad. After spending two months with them I am convinced that there is a special place in hell for people who invent and manufacture battery-operated keyboards for children. One day I mildly suggested that I either lose one of its batteries or slide the entire contraption under a tractor tire.

The Mermaid’s Garden Cafe and B&B

Initially, there were small adjustments that we all needed to make before living peacefully together, but after the first few weeks, we managed to settle into our roles and chores. There were times, however, when Paraic was completely dumbfounded and slightly horrified with our lifestyle. Most mornings Kees and I rose late by Pariac’s standards (8 a.m. versus 7 a.m.), and one of us would shuffle down to the kitchen still dressed in our pajamas, and saunter back up again with a tray of tea and cereal to have breakfast in bed. How could we do this WITHOUT EVEN BEING SICK!? Despite Paraic’s unspoken disapproval we continued our morning ritual treasuring this time together, as once the long day of chores and children, guests and cleaning, gardening and cooking began, we rarely found time for ourselves.

My days soon whirled around the café and kids. The work varied, much of it unpredictable. For the café, I cooked cream of garden vegetable soup, baked lasagna, fried spinach fritters, tossed pasta salad, washed mountains of dishes, waitressed, and created flyers, menus, business cards, and posters. In between all that, I burped and rocked the baby to sleep; danced with Bebhinn; took children on long walks and to swim in the sea; picked up toys; hung, took down from the line, folded, and put clothes away; ironed tablecloths; harvested peas and root beets; played “Old Maid” and drew pictures of mermaids and monsters. 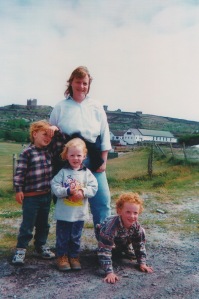 Pariac and the kids pick us up at the ferry.

During my free time, I’d catch Gaelic sounds while walking down a donkey path, the Irish language a much sweeter murmur than the kerplunk! of English. Nearby there was a broad sandy beach and on sparkling, calm mornings a lone dolphin would jump from the sea and chase cormorants. Tempted by the dolphin’s play, I tried to enter the water but needed nearly a dozen attempts before fully immersing myself into the freezing sea. I’d watch amazed as young and old Irish islanders and visitors flung their creamy white bodies into the cold Atlantic. The island women were big and hardy, yet despite their bulk, agile and at ease in their bodies.

Because the island sits so far north, June’s midnight sky was full of light and I would wait as late for the full moon to rise. One evening while walking on the beach just as the tide was going out, I tiptoed around an army of jellyfish littering the shoreline. To the east, there is a deep lake, whose blue waters are a mixture of fresh and sea waters. One evening a family of swans floated past, the mother gliding beside her fluffy grey fledglings.

To be continued next time…

2 thoughts on “Stones and Seaweed (Part I of II)”